This week’s Book Trailer Wednesday pick is If He’s Wicked by Hannah Howell. This is Book One in her Wherlocke series. As a fan for nearly two decades of her work, it was exciting to find one of her book trailers on youtube. 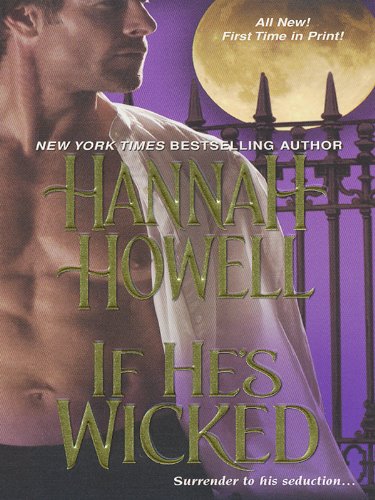 She Saves His Life…

For Chloe Wherlocke, it all begins with a vision–a glimpse into the future that foretells a terrible plot against Lord Julian Kenwood and his newborn son. Chloe’s psychic gift allows her to save the child from certain death, but the earl remains in grave peril…

But When He Steals Her Heart…

Julian Kenwood knows someone is trying to kill him and he suspects his scheming wife and her lover are behind the plot. But Julian is shocked when Chloe, a captivating, dark-haired stranger, warns him that sinister forces are indeed at hand–and exposes a devastating secret that changes his life forever…

As Chloe reveals her plan to save Julian, neither can deny the attraction that grows each moment they’re together. Chloe knows the highborn earl could never love her as she loves him. But when danger strikes closer than ever, Chloe must risk everything–or lose Julian forever…

As I mentioned before, this is the first book in the Wherlocke Series. At this time, the series holds a total of five books. As a previous fan of both the Murrays and her vampire series, I look forward to reading this series. I’m still reeling at how I possibly missed a series that started in 2009.

While a good start of an obviously well liked series, I have to admit it wasn’t my favorite by Hannah Howell. I had a lot of difficulty keeping with the story. It didn’t have the draw that I usually feel when reading a book by one of my favorite authors. The “I can’t/don’t want to put it down” feeling. It just wasn’t there for me this time, and I find I really can’t pinpoint what it was missing.

The story has a mixture of romance, mystery and suspense. She even threw in a few murders and political machinations in the form of treason. The characters were likable. I found I liked Chloe’s innocence mixed in with a bit of spice. Her lack of stuffy, aristocratic behavior was refreshing as well. The heat between her and Julian was ice melting, but yet there remained a gentleness to their relationship. Both sweet and spicy, an intriguing mix.

I found myself surprised by the evil portrayed in the antagonists. They were pure evil with nothing redeemable, which I found a bit unusual. Although, I think this change helped keep the story from being typical for me.

I enjoyed the way the author took the same old historical style romance and added the paranormal twist to it. Like most of the Wherlocke family, Chloe has a gift. The heroine has the ability to see into the future. As the description says, this gift is the basis for saving the hero and his child.

Favorite: I adored the interaction between Julian’s son and Chloe. Her natural instincts, when it comes to motherly affection, appealed to me.

Disappointed: I wanted to hear more about the other family members and their gifts. More on the family history in general would’ve been a nice bonus. I felt like it was a missed opportunity.

Overall, it was an enjoyable read. Despite the fact, it took longer for me to read than normal, I’m very interested in continuing the series. Right now, it’s only $4.50 on Amazon for 352 pages. I give it 4 hearts.