This weeks’ book trailer came to my attention by accident. I usually spend an hour or so each day seeking book trailers to share on my facebook page. I try to share new trailers everyday to help support other authors. My three main sources are direct searches on YouTube, Goodreads and my twitter feed. An author I follow on twitter showed up in my search results. That recognition prompted me to watch the video and here we are. 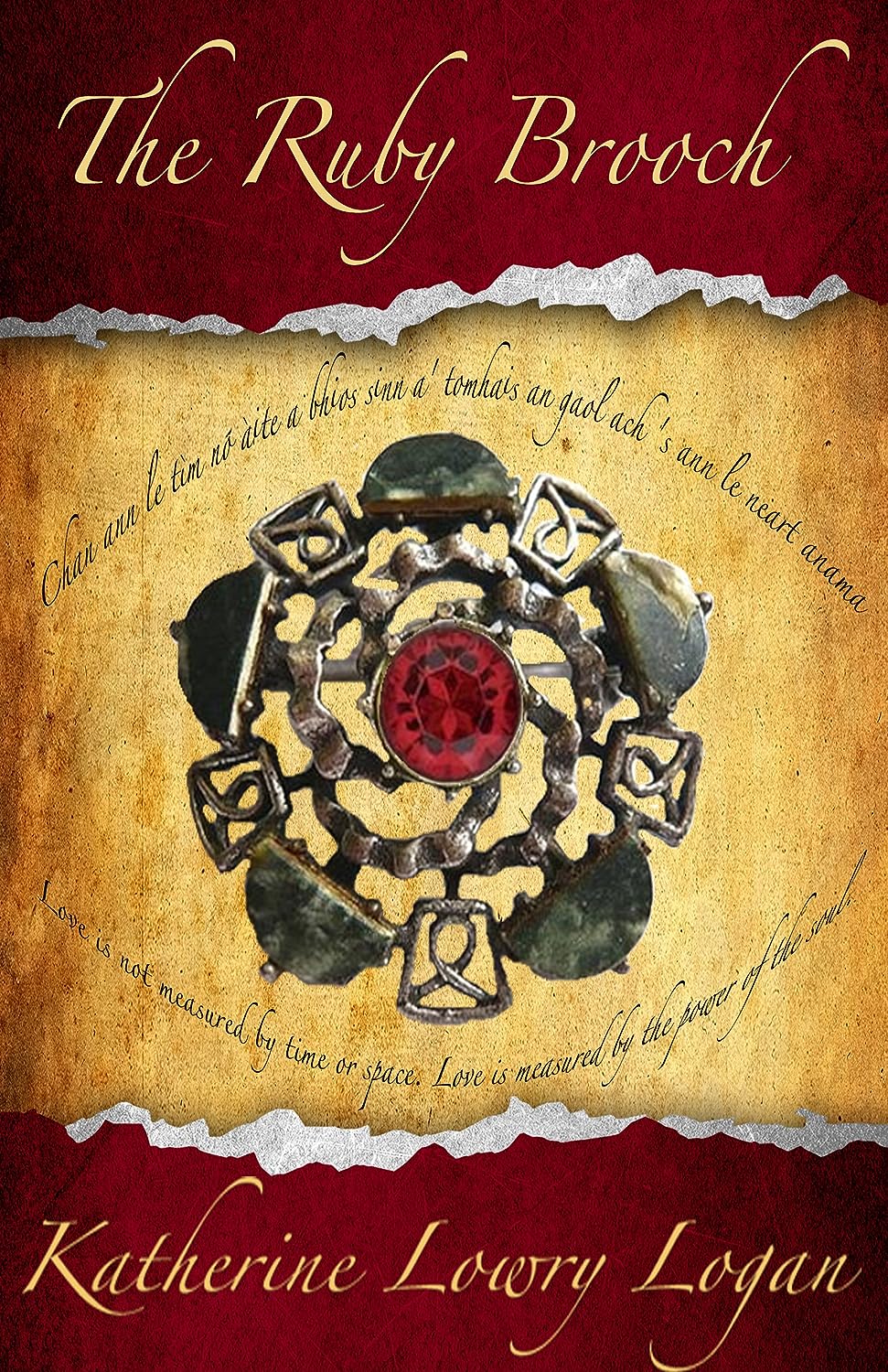 From the white-plank fenced pastures of Lexington, Kentucky to the Bay of San Francisco, The Ruby Brooch, a time travel romance steeped in family tradition and mystery, follows a young woman’s quest as she attempts to solve the murder of her birth parents 160 years in the past.

As the lone survivor of a car crash that killed her parents, grief-stricken paramedic Kit MacKlenna makes a startling discovery that further alters her life. A faded letter and a well-worn journal reveal that she was abandoned as a baby. The only clues to her identity are a blood-splattered shawl, a locket that bears a portrait of a 19th century man, and a Celtic brooch with mystical powers.

After studying the journal, she decides to continue her father’s twenty-five year search for her identity and solve her birth parents’ murders. She adopts the persona of the Widow MacKlenna, a role she’s played in pioneer re-enactments, and a perfect cover for her eccentric behavior. Then she utters the incantation inscribed on the ancient stone and is swept back in time to the year 1852. She arrives in Independence, Missouri, one of the Oregon Trail’s jumping off points.

She soon meets Scotsman Cullen Montgomery, a San Francisco-bound lawyer who resembles the ghost who has haunted Kit since childhood. With Cullen’s assistance, she joins a wagon train heading west. The journey is fraught with dangerous river crossings, bad water, and disease. Nothing, however, is more dangerous than Cullen’s determination to uncover the source of her unusual knowledge and life-saving powers and expose the real Kit MacKlenna.

If she can survive the perilous journey and Cullen’s accusations and thwart his attempts to seduce her, she might find the answers she seeks and return home to a new life without changing history or leaving a broken heart on the other side of time.

This 19th century sensuous time travel romance comes complete with an ensemble cast who share a common goal. The children’s antics will make you laugh. The parents’ worries will make your heart pound. Kit and Cullen’s flirtatious banter will make you wonder what will happen between them. You’ll taste the dust from the trail, smell the burned coffee, feel the pain and tears when tragedy hits, and hear the cattle lowing. You’ll want to dance to the sound of the banjos and sigh at the sight of the sun setting over the prairie. You’ll share their hardships, their disappointments, and their celebrations. And at the end of the story, you won’t want to leave them behind.

Join Kit, Cullen, a handful of endearing animals, the Barrett family and Henry as they travel across this country by covered wagon. “If a man’s dreams could be painted,” Cullen said, looking out over a long line of wagons, “you’re looking at a masterpiece.”

After her parent’s deaths certain truths come to light that Kit finds hard to deal with, especially when it puts everything her daddy taught her in question. The thought of not knowing her roots, where she came from and who her true parents were drove her to take risky actions. She heads to a past and a way of life she only thinks she’s prepared for. Along the way she learns a lot of truths about herself that changes her forever.

Kit MacKlenna – A stubborn, opinionated 25 year old paramedic who tends to forget what century she’s in. She spends a lot of the book fighting against Cullen’s need to protect and her own desire to loosen some of her control an allow him to protect her.

Cullen Montgomery – A highlander, described by the author as part-highland-bard, part-American-cowboy and all man. Intelligence, leadership and a burning need to take care of others lands him as quasi leader and protector of a wagon train headed for Oregon.

Though I always have a favorite character in a book I don’t always mention it. This time around I thought I’d share both my favorite character and my favorite line. This book was filled with quotes from poets and plays, but it’s Kit’s private thoughts that held the most appeal for me. I found myself writing down many lines throughout the story, but narrowed it down to one for this review.

My Favorite Line: “Sometimes life is nothing more than a photo album full of goodbye pictures.”

My favorite character happened to be Frances. Though her part was a minor one I found the child’s forward nature endearing.

I found the premise of the brooch and everything it stood for a fascinating aspect of the story. The mystery surrounding the family especially the main character and how the author let events unfold allowed the reader to unravel the mystery right along with the characters. Rich with descriptions, fast paced and complete character development this book allowed you to conjure fully fleshed out characters in your mind with plenty of personality and sass.

My ability to get lost in the pages says a lot for the author’s writing style. I enjoyed getting to know each character. Laughing and crying with each scene as Kit works to uncover the mysteries of her past. Though American History is not always my favorite the author’s combination of fact and fiction peaked my interest and held me captivated to the end.

Great story, I look forward to reading more from this author in the future. I give this book 4.5 hearts.